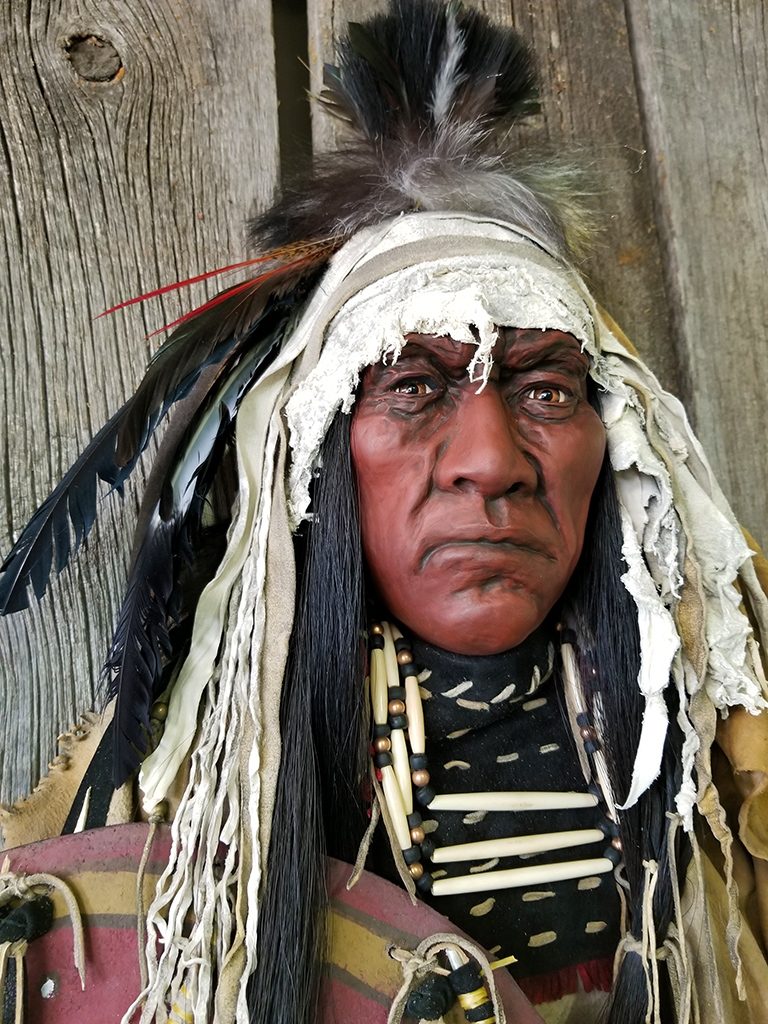 Red Wolf is a Cherokee Indian legend and illustrates the most important battle of our lives. The one between our good and bad thoughts. The First Nations had great respect for Wolves because of their likeness. Both Natives and Wolves hunt, gather, defend and even educate their tribe or pack. The Wolf has always been respected as a very family oriented animal because he mates for life, watches and protects his young until they are old enough to be independent and protects the elders. If direction and purpose are lacking in life, when clarity and persistence are needed, the steadfast determination of the Wolf can overcome fear, indecision and confusion. Healers often take the form of the Wolf in their ritual work. Wolves are fierce, loyal, independent and well able to offer support on the most challenging healing journey. ” Red Wolf ” Limited Edition Mask/ 25 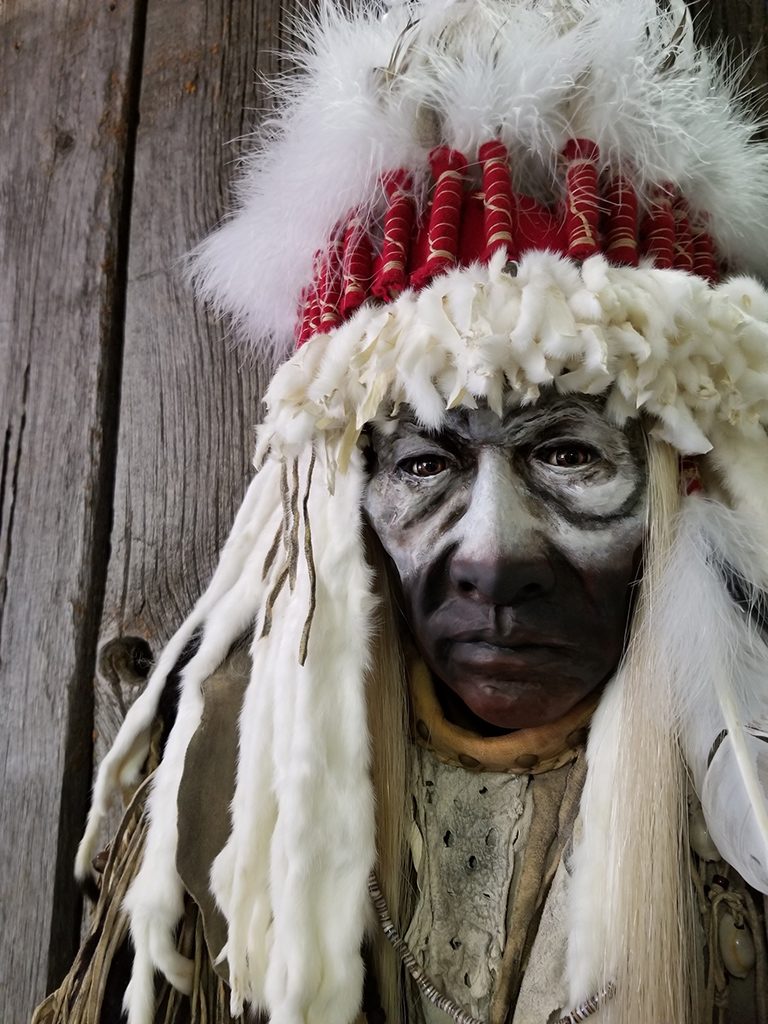 “Some Indians from the West came to trade with the Blackfoot band. They were called “Snake Indians” as their designs were jagged and looked like a snake.Among their trading goods were some skins that looked like a dog, but had feet like a beaver and a kind of fish tail. When asked where these came from, they were told they lived in the Big Water where the Sun sets and some came up the Big River where they lived. The fur was finer than a beaver or martin and one skin traded for buffalo robes or a horse or equivalent. One asked to go back with the Traders to see these “Devil Fish” and maybe get some for himself. He gave the leader one of his finest horses for the privilege and was invited. He took horses and robes and other trade goods to these “Devil Fish” with whatever tribe in the West or at the Big Water that had them. When he returned he had two “Fish Dog” skins, some shells and related this story: The “Snakes” took him back to their Camp. Since the “Devil Fish” hadn’t been for a long time they sent one of their tribe to go with him to another tribe to the West of them along the Big River. Most of these people lived on fish, catching them by spearing them and dried them just like the Blackfoot did with Buffalo. He traded and moved West until he came to the Big Water where the Sun sunk. There he traded the last of his trade goods, even his moccasins and clothes for their clothes, shells from the edge of the Big Water, and as many “Devil Dog Skins as his last horse could carry. He saw the Devil Fish swimming at a distance. They came out the shore and barked like a dog and were in herds like the buffalo. Some said they could be eaten, but he didn’t taste any, as the Blackfoot don’t eat dogs. On his way back he traded some and had some stolen. He was only able to make it home with two, one of which was offered to the Sun for his safe journey and protection. The other one was used to wrap his Medicine Bundle which was handed down through his family.” 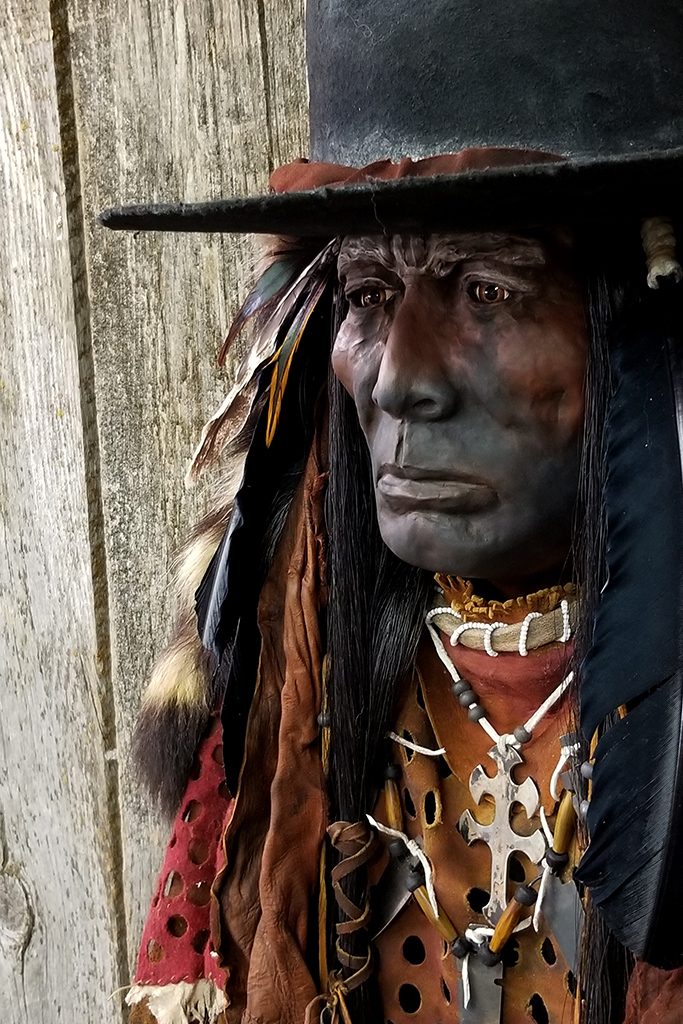 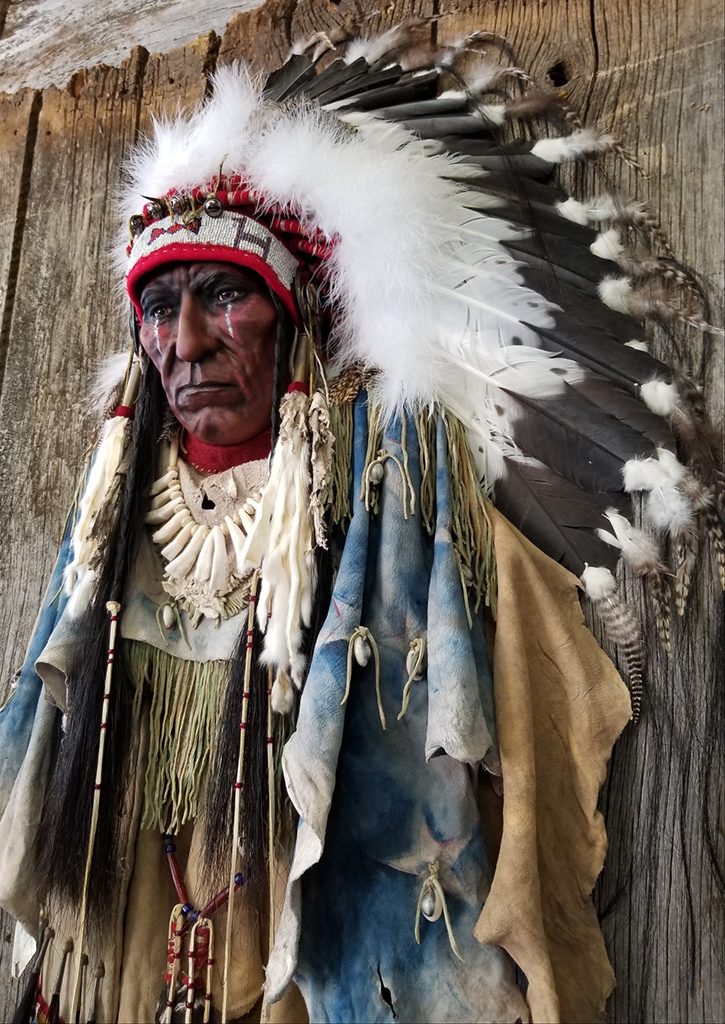 When a star falls from the sky It leaves a fiery trail. It does not die. Its shade goes back to its own place to shine again. The Indians sometimes find the small stars where they have fallen in the grass. The Pawnee have a story about a person known as Pahokatawa , who was supposedly killed bu an enemy and eaten by animals, but then brought back to life by gods. He was said to have come to Earth as a meteor and told the people that when meteors were seen falling in great numbers it was not a sign that the world would end. When the Pawnee tribe witnessed the time” the stars fell upon the earth,” which was in 1833, there was a panic, but the leader of the tribe spoke up and said, “Remember the words of Pahokatawa” and the people were no longer afraid. 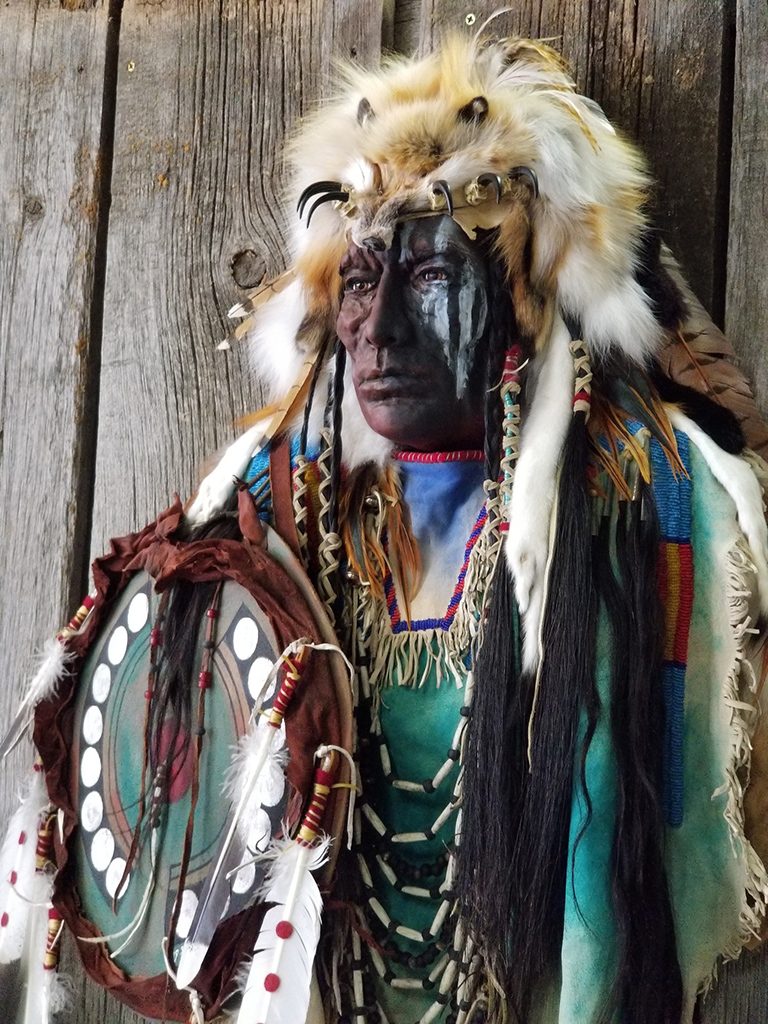 Dog Soldier Collection. Within the Cheyenne tribe there used to be a military society made up of the strongest and bravest men. They were fierce fighters- unyielding. The Calvary called them Dog Soldiers or suicide soldiers. They often acted as rear guards, or sacrificial decoy, so the rest of the tribe could escape. Dog Soldier VII, Limited Edition/20

Tamaqua The Great Peacemaker Chief of the Delaware Nation {Sold Out} 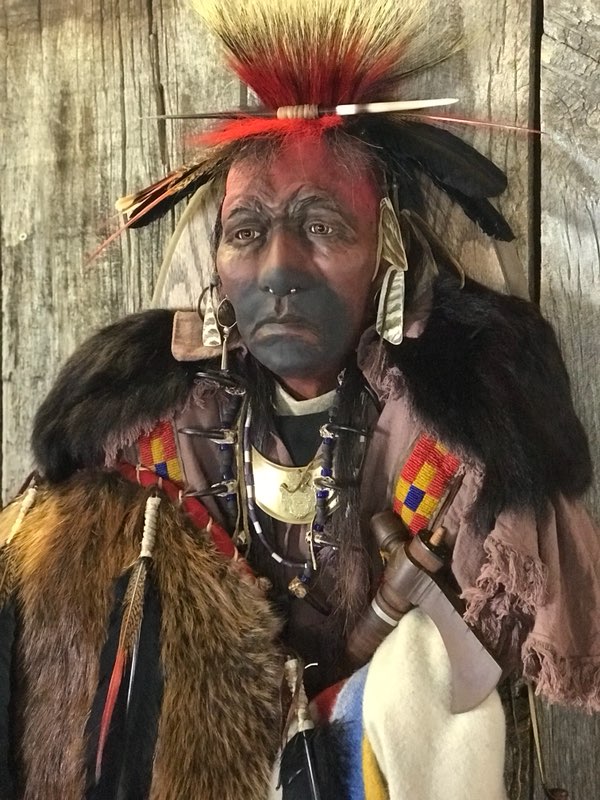 A gentleman commissioned me to make a mask called “King Beaver”. Also known as Tamaqua, the great peacemaker and Chief of the Deleware Nation. The French and Indian War brought violence to the Pennsylvania frontier that threatened the Indian way of life. Tamaqua’s vision was to find peace with his brother the English. This could only be achieved with strong words of cooperation, bound by the spiritually powerful Wampum beads. The pictograph on the wampum belt tells a Tribal story. When the belt is presented as a gift, it binds a man’s words for generations. Tamaqua’s wampum diplomacy obtained the release of hundreds of white captives; and he said:”…I came to confirm our friendship and make a lasting peace, so as our children and grandchildren may live together in everlasting peace…” 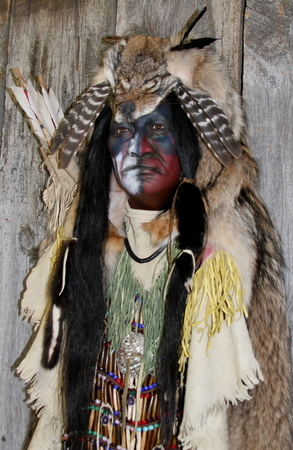 Dog Soldier VI Within the Cheyenne tribe there used to be a military society made up of the strongest and bravest men. They were fierce fighters- unyielding. The Calvary called them Dog Soldiers or suicide soldiers. They often acted as rear guards, or sacrificial decoy, so the rest of the tribe could escape. Dog Soldier VI, Limited Edition/35 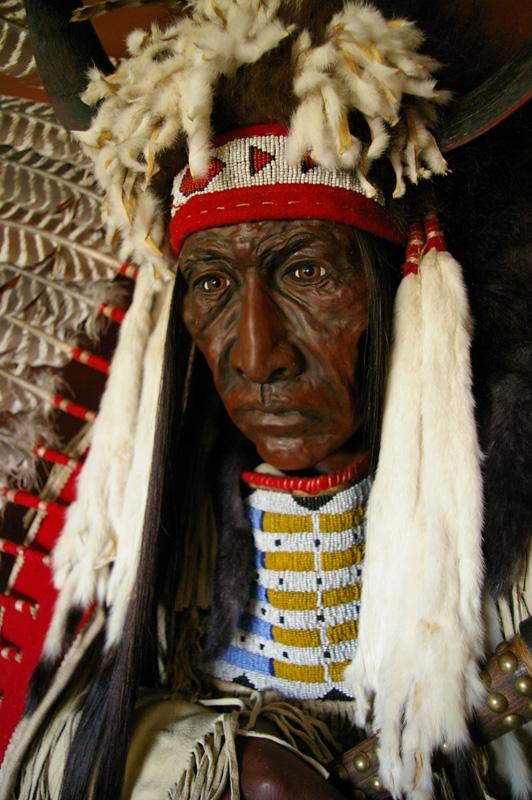 The Wolf exemplified craft in war and hunting. The animal was highly respected an all Indians regarded it as an ally. They believed the Wolf would, at times, talk to them and tell them of things that would happen. Such as when this young Brave was hunting and two Wolves chased a family of Elk into the path of his arrows providing his village with much needed meat and hides for the winter. This Brave and his village saw this event as an important omen and he was given his name from this happening. “ Two Wolfs Hunting” is a Limited Edition/ 3. 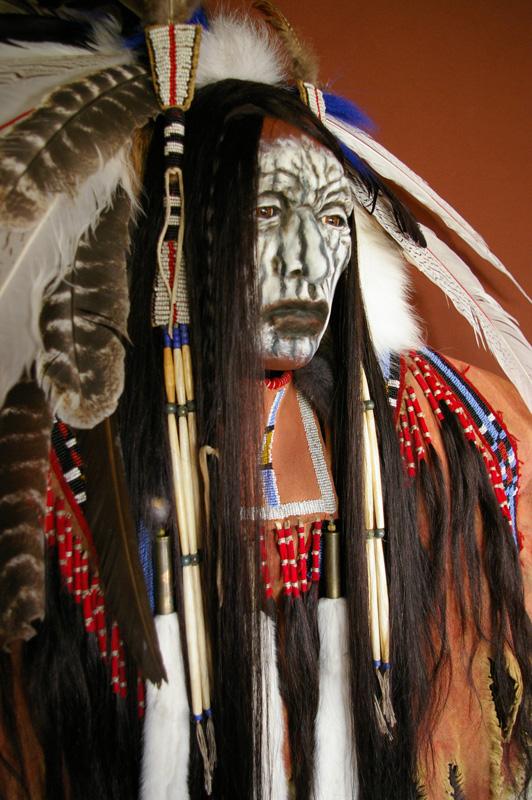 To some tribes the Bear was a symbol of renewed life as the bear would hibernate through the winter and re-appear in the spring. A Brave, while hunting and coming upon a bear emerging from it’s hibernation had but two choices, either run or attempt to kill it. This Crow Brave was successful in his choice and honored the bear by painting it’s representation on his shield to aid in calling on the power of the bear to safeguard the brave in battle. Indians believed bears to have the power to fend off most of the bullets and arrows shot at it and that the bear could bestow these powers on those it wished to help. Kills Bear is a Limited Edition/ 3. 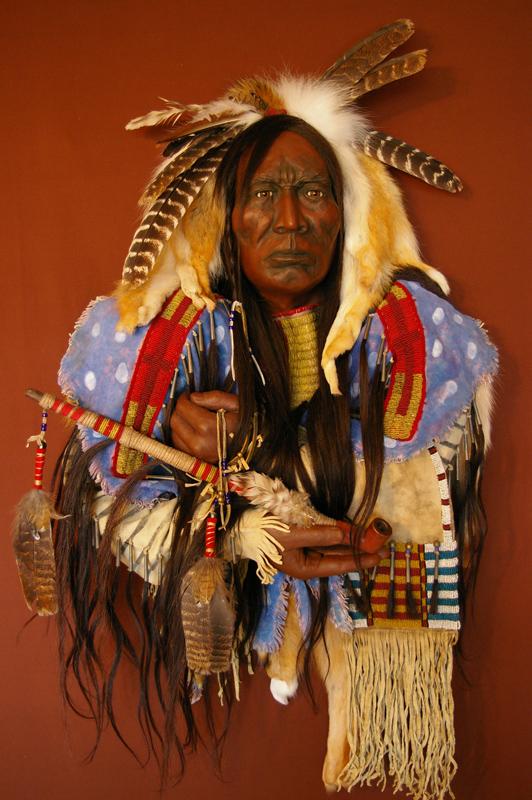 Chief Red Cloud was the chief of the Oglala Sioux Indian tribe. He was one of the fiercest enemies the U.S. Army ever fought. He led the successful campaign known as Red Cloud’s war between 1866 and 1868. Red Cloud fought the army for control of parts of Montana and Wyoming. Red Cloud’s judgment was, why should I allow any man to support me against my will anywhere, so long as I am a great warrior living on my own land. Red Cloud continued to fight for the freedom of his people. He died on December 10, 1909. Red Cloud is a one-of-a-kind piece.